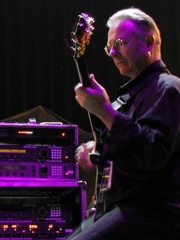 Robert Fripp (born 16 May 1946) is an English musician, songwriter, and record producer, best known as the guitarist, founder and longest lasting member of the progressive rock band King Crimson. He has worked extensively as a session musician and collaborator, notably with David Bowie, Blondie, Brian Eno, Peter Gabriel, Daryl Hall and David Sylvian. He has also contributed sounds to the Windows Vista operating system. Read more on Wikipedia

Since 2007, the English Wikipedia page of Robert Fripp has received more than 1,881,423 page views. His biography is available in 37 different languages on Wikipedia making him the 94th most popular musician.