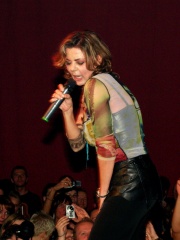 Sandra Ann Lauer (born 18 May 1962), commonly known under her stage name Sandra and Sandra Cretu (German pronunciation: [ˈzandʁa]), is a Franco-German pop singer who enjoyed mainstream popularity in the 1980s and early 1990s with a string of European hit singles, produced by her then-husband and musical partner, Michael Cretu, most notably "(I'll Never Be) Maria Magdalena" (1985), "In the Heat of the Night" (1985), "Everlasting Love" (1987), "Secret Land" (1988), "Hiroshima" (1990), and "Don't Be Aggressive" (1992). Her albums Into a Secret Land (1988) and Close to Seven (1992) have won Sandra high critical acclaim.Prior to embarking on a solo career, Sandra was the lead singer of the all-female disco trio Arabesque, which had a massive following in Japan and the Soviet Union. Also, between 1990 and 2001, she provided vocals on album releases of the very successful musical project Enigma, which had top 10 hits in North America and the United Kingdom. Read more on Wikipedia

Sandra Bullock is most famous for her role in the movie "Speed" and her Academy Award-winning performance in "The Blind Side."

Page views of Sandras by language