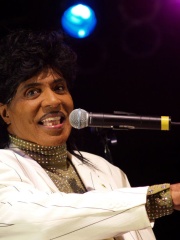 Richard Wayne Penniman (December 5, 1932 – May 9, 2020), better known as Little Richard, was an American musician, singer, and songwriter. He was an influential figure in popular music and culture for seven decades. Nicknamed "The Innovator, The Originator, and The Architect of Rock and Roll," Richard's most celebrated work dates from the mid-1950s, when his charismatic showmanship and dynamic music, characterized by frenetic piano playing, pounding back beat and raspy shouted vocals, laid the foundation for rock and roll. Read more on Wikipedia

Little Richard is most famous for his rock and roll music.

Among singers, Little Richard ranks 58 out of 3,541. Before him are Joe Dassin, Marvin Gaye, Albano Carrisi, Art Garfunkel, Constanze Mozart, and Carlos Gardel. After him are Jennifer Lopez, José Carreras, Glen Campbell, Marianne Faithfull, The Notorious B.I.G., and Víctor Jara.