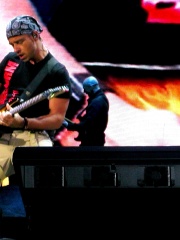 Eros Walter Luciano Ramazzotti (Italian: [ˈɛːroz ˈvalter luˈtʃaːno ramatˈtsɔtti]; born 28 October 1963) is an Italian pop singer, musician and songwriter. He is popular in Italy and most European countries, and throughout the Spanish-speaking world, as he has released most of his albums in both Italian and Spanish.Since 1984, Ramazzotti has released 11 studio albums, one EP, three compilation albums, three live albums, and 37 singles. He has sold over 60 million records in his 30-year career. Read more on Wikipedia

Eros Ramazzotti is most famous for his music.

Among people born in 1963, Eros Ramazzotti ranks 14. Before him are José Mourinho, George Michael, Viktor Orbán, Garry Kasparov, Till Lindemann, and Mohammed VI of Morocco. After him are Sergey Bubka, Donnie Yen, James Hetfield, James May, Lisa Kudrow, and Alejandro González Iñárritu.