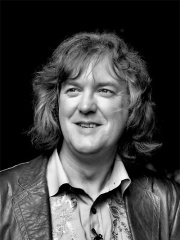 James Daniel May (born 16 January 1963) is an English television presenter and journalist. He is best known as a co-presenter of the motoring programme Top Gear alongside Jeremy Clarkson and Richard Hammond from 2003 until 2015. From 2015 until 2019, he was a director of the production company W. Chump & Sons. Read more on Wikipedia

James May is a British TV presenter, journalist, and writer. He is best known for co-presenting the BBC Two motoring show Top Gear alongside Jeremy Clarkson and Richard Hammond from 2003 until 2015.

Among people born in 1963, James May ranks 18. Before him are Till Lindemann, Mohammed VI of Morocco, Eros Ramazzotti, Sergey Bubka, Donnie Yen, and James Hetfield. After him are Lisa Kudrow, Alejandro González Iñárritu, Thomas Anders, Tori Amos, Peter Schmeichel, and Rafael Correa.