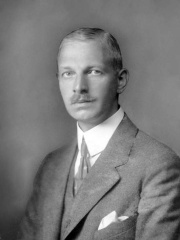 Wilhelm Carl Josef Cuno (2 July 1876 – 3 January 1933) was a German businessman and politician who was the Chancellor of Germany from 1922 to 1923, for a total of 264 days. His tenure included the episode known as the Occupation of the Ruhr by French and Belgian troops and the period in which inflation in Germany accelerated notably, heading towards hyperinflation. Read more on Wikipedia

Since 2007, the English Wikipedia page of Wilhelm Cuno has received more than 95,628 page views. His biography is available in 42 different languages on Wikipedia. Wilhelm Cuno is the 2,868th most popular politician (up from 2,879th in 2019), the 801st most popular biography from Germany (down from 755th in 2019) and the 222nd most popular German Politician.

Wilhelm Cuno was the German Chancellor from 1922-1923. He is most famous for being the Chancellor of Germany during the hyperinflation that occurred in the early 1920s.

Among politicians, Wilhelm Cuno ranks 2,868 out of 15,710. Before him are Kuniaki Koiso, George Boleyn, 2nd Viscount Rochford, Gotthard Kettler, Parashurama, Agnes of Merania, and John I of Aragon. After him are Eric IV of Denmark, Princess Astrid, Mrs. Ferner, John George III, Elector of Saxony, Pharnavaz I of Iberia, Al-Walid II, and Carlos Hugo, Duke of Parma.