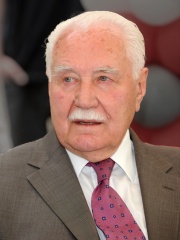 Ryszard Kaczorowski, GCMG ([ˈrɨʂart kat͡ʂɔˈrɔfskʲi] (listen); 26 November 1919 – 10 April 2010) was a Polish statesman. From 1989 to 1990, he served as the last President of Poland-in-exile. He succeeded Kazimierz Sabbat, and resigned his post following Poland's regaining independence from the Soviet sphere of influence and the election of Lech Wałęsa as the first democratically elected President of Poland since before the Second World War. Read more on Wikipedia

Among politicians, Ryszard Kaczorowski ranks 4,799 out of 15,577. Before him are Matilda of England, Duchess of Saxony, Horia Sima, King Mu of Zhou, Frederick Francis I, Grand Duke of Mecklenburg-Schwerin, Mizizios, and Munjong of Goryeo. After him are Herennia Etruscilla, Elijah Muhammad, Marie-Adélaïde, Grand Duchess of Luxembourg, Hans Modrow, Iziaslav II of Kiev, and Al-Mustansir.