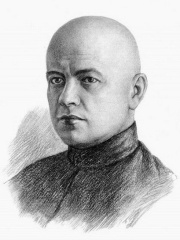 Stanisław Vikentyevich Kosior (Russian: Станислав Викентьевич Косиор, 18 November 1889 – 26 February 1939), sometimes spelled Kossior, was a Soviet politician who was First Secretary of the Communist Party of Ukraine, Deputy Premier of the Soviet Union and member of the Politburo of the Communist Party of the Soviet Union (CPSU). In 2010, the Kyiv, Ukraine Court of Appeal affirmed criminal charges against Kosior with complicity in the Soviet government-engineered famine and genocide known as the Holodomor. Read more on Wikipedia

Among politicians, Stanislav Kosior ranks 4,897 out of 15,710. Before him are Theobald II, Count of Champagne, Nzinga of Ndongo and Matamba, Henry III, Margrave of Meissen, Jean-Pierre Boyer, Kyriakos Mitsotakis, and Boyko Borisov. After him are Juan Prim, 1st Count of Reus, Mikheil Saakashvili, Altiero Spinelli, Countess Palatine Maria Franziska of Sulzbach, Æthelred of Mercia, and Ansegisel.