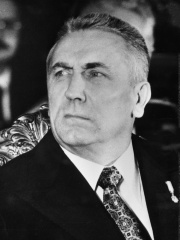 Edward Gierek (Polish pronunciation: [ˈɛdvart ˈɡʲɛrɛk]; 6 January 1913 – 29 July 2001) was a Polish Communist politician and de facto leader of Poland between 1970 and 1980. Gierek replaced Władysław Gomułka as First Secretary of the ruling Polish United Workers' Party (PZPR) in the Polish People's Republic in 1970. He is known for opening communist Poland to the Western Bloc and for his economic policies based on foreign loans. Read more on Wikipedia

Among politicians, Edward Gierek ranks 5,112 out of 15,710. Before him are Tammam Salam, Leonardo Loredan, Cleomenes II, Carlos Saavedra Lamas, Kalākaua, and Milan Hodža. After him are Prince Frederick of the Netherlands, Publius Cornelius Lentulus Sura, Alberto Fernández, Catherine of Bosnia, Theodora, and Mamnoon Hussain.