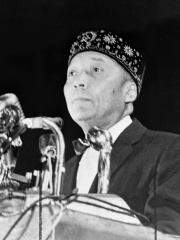 Elijah Muhammad (born Elijah Robert Poole; October 7, 1897 – February 25, 1975) was an African American religious leader, black separatist, and self-proclaimed Messenger of Allah, who led the Nation of Islam (NOI) from 1934 until his death in 1975. Muhammad was also the teacher and mentor of Malcolm X, Louis Farrakhan, Muhammad Ali, and his own son, Warith Deen Mohammed. In the 1930s, Muhammad established the Nation of Islam, a religious movement that promoted black pride, economic empowerment, and separation of black and white Americans. His ideas were strongly influenced by Wallace Fard Muhammad, who was the founder of the NOI. Read more on Wikipedia

Among politicians, Elijah Muhammad ranks 4,801 out of 15,577. Before him are King Mu of Zhou, Frederick Francis I, Grand Duke of Mecklenburg-Schwerin, Mizizios, Munjong of Goryeo, Ryszard Kaczorowski, and Herennia Etruscilla. After him are Marie-Adélaïde, Grand Duchess of Luxembourg, Hans Modrow, Iziaslav II of Kiev, Al-Mustansir, Shote Galica, and Modibo Keïta.