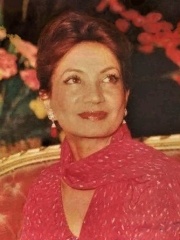 Ashraf ol-Molouk Pahlavi (Persian: اشرف‌الملوک پهلوی, Ašraf Pahlavi, 26 October 1919 – 7 January 2016) was the twin sister of Mohammad Reza Pahlavi, the last Shah of Iran (Persia), and a member of the Pahlavi dynasty. She was considered the "power behind her brother" and was instrumental in the 1953 coup that overthrew Prime Minister Mohammad Mosaddegh in favour of strengthening the monarchical rule of the Shah. She served her brother as a palace adviser and was a strong advocate for women's rights. Read more on Wikipedia

Among politicians, Ashraf Pahlavi ranks 5,173 out of 15,577. Before her are Yamato Takeru, Quintus Caecilius Metellus Numidicus, Bermudo III of León, Bairam Khan, Ninus, and Samir Amin. After her are Andrés Nin Pérez, Shigechiyo Izumi, Ri Chun-hee, Dino Grandi, Bahadur Shah I, and Bermudo II of León.