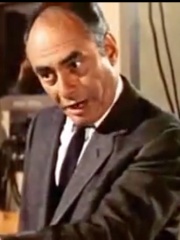 Martin Henry Balsam (November 4, 1919 – February 13, 1996) was an American actor who had a prolific career in character roles in film, in theatre, and on television. An early member of the Actors Studio, he began his career on the New York stage, winning a Tony Award for Best Actor in a Play for Robert Anderson’s You Know I Can't Hear You When the Water's Running (1968). He won the Academy Award for Best Supporting Actor for his performance in A Thousand Clowns (1965). His other notable film roles include Juror #1 in 12 Angry Men (1957), private detective Milton Arbogast in Psycho (1960), Hollywood agent O.J. Berman in Breakfast at Tiffany's (1961), Bernard B. Read more on Wikipedia

Martin Balsam is most famous for his role as Detective Arbogast in Alfred Hitchcock's 1960 film, Psycho.