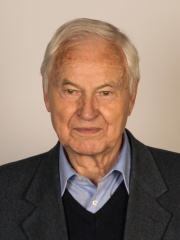 Hans Modrow (German pronunciation: [ˈhans ˈmoːdʁo]; born 27 January 1928) is a German politician best known as the last communist premier of East Germany. Taking office in the middle of the Peaceful Revolution, he was the de facto leader of the country for much of the winter of 1989 and 1990, attempting to delay German reunification. After the end of Communist rule and reunification of Germany, he was singled out by the new government and convicted of electoral fraud and perjury by the Dresden District Court in 1995, on the basis that he had been the SED official nominally in charge of the electoral process. Read more on Wikipedia

Among politicians, Hans Modrow ranks 3,972 out of 15,710. Before him are Nikolai Ryzhkov, Louis, Count of Évreux, Otto Georg Thierack, Casimir I the Restorer, Gesalec, and Lady Mary Victoria Douglas-Hamilton. After him are Sa'id of Egypt, François Louis, Prince of Conti, James I, Count of La Marche, Áed mac Cináeda, Lugalbanda, and Prince August Wilhelm of Prussia.