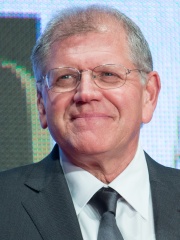 Robert Lee Zemeckis (born May 14, 1952) is an American filmmaker. He first came to public attention as the director of the action-adventure romantic comedy Romancing the Stone (1984), the science-fiction comedy Back to the Future film trilogy (1985–1990), and the live-action/animated comedy Who Framed Roger Rabbit (1988). He subsequently directed the satirical black comedy Death Becomes Her (1992) and then diversified into more dramatic fare, including Forrest Gump (1994), for which he won the Academy Award for Best Director and the film won Best Picture. Read more on Wikipedia

Robert Zemeckis is most famous for directing and producing the Back to the Future trilogy.