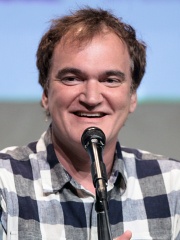 Quentin Jerome Tarantino (; born March 27, 1963) is an American film director, screenwriter, producer, and actor. His films are characterized by nonlinear storylines, dark humor, aestheticization of violence, extended scenes of dialogue, ensemble casts, references to popular culture and a wide variety of other films, eclectic soundtracks primarily containing songs and score pieces from the 1960s to the 1980s, alternate history, and features of neo-noir film. Born in Knoxville, Tennessee, Tarantino grew up in Los Angeles. Read more on Wikipedia

Quentin Tarantino is most famous for his films. He is a director, screenwriter, producer, and actor.