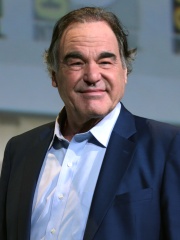 William Oliver Stone (born September 15, 1946) is an American film director, producer, and writer.Stone won an Academy Award for Best Adapted Screenplay as writer of Midnight Express (1978), and wrote the gangster movie Scarface (1983). Stone achieved prominence as writer and director of the war drama Platoon (1986), which won Academy Awards for Best Director and Best Picture. Platoon was the first in a trilogy of films based on the Vietnam War, in which Stone served as an infantry soldier. Read more on Wikipedia

Since 2007, the English Wikipedia page of Oliver Stone has received more than 4,880,403 page views. His biography is available in 62 different languages on Wikipedia making him the 51st most popular film director.