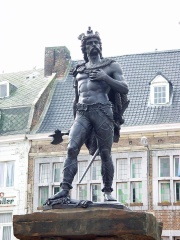 Ambiorix (Gaulish "king of the surroundings", or "king-protector") (fl. 54–53 BC) was, together with Cativolcus, prince of the Eburones, leader of a Belgic tribe of north-eastern Gaul (Gallia Belgica), where modern Belgium is located. Read more on Wikipedia

Since 2007, the English Wikipedia page of Ambiorix has received more than 311,608 page views. His biography is available in 33 different languages on Wikipedia (up from 32 in 2019). Ambiorix is the 2,069th most popular politician (down from 2,024th in 2019), the 77th most popular biography from Belgium and the 25th most popular Belgian Politician.

Ambiorix was a chieftain of the Eburones tribe in Gaul. He is most famous for being the leader of the tribes who defeated the Romans in the Battle of the Sabis in 54 BC.

Page views of Ambiorixes by language

Among politicians, Ambiorix ranks 2,069 out of 15,710. Before him are Hermann Müller, Krum, Frederick III of Sicily, Nicos Anastasiades, Nadab of Israel, and Konstantin Päts. After him are Géza II of Hungary, Amel-Marduk, Sverre of Norway, Emperor Hui of Han, Archduchess Maria Josepha of Austria, and Nicholas I of Montenegro.

Among people born in 100 BC, Ambiorix ranks 12. Before him are Joachim, Elizabeth, Herodias, Simon of Cyrene, Cornelius Nepos, and Gamaliel. After him are Ptolemy XI Alexander II, Gaius Octavius, Andronicus of Rhodes, Antipater the Idumaean, Mary of Clopas, and Publilius Syrus. Among people deceased in 53 BC, Ambiorix ranks 2. Before him is Marcus Licinius Crassus. After him is Publius Licinius Crassus.

Others Deceased in 53 BC