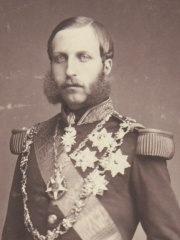 Prince Philippe of Belgium, Count of Flanders (24 March 1837 – 17 November 1905) was the third born and second surviving son of Leopold I, King of the Belgians and his wife Louise d'Orléans (1812–1850). Born at the Château de Laeken, near Brussels, Belgium, he was created Count of Flanders on 14 December 1840. Upon the death of his nephew, Prince Leopold, Duke of Brabant, Philippe became heir presumptive to the Belgian throne, from 1869 until his own death in 1905. In 1866, after the abdication of Alexandru Ioan Cuza, Prince of Romania, he refused being named the new Romanian sovereign, and the throne was later accepted by Carol I. Read more on Wikipedia

Prince Philippe, Count of Flanders is most famous for being the son of King Louis II of France and Queen Marie of Hungary. He was also a grandson of King Louis I of Hungary and Bohemia. He was the first husband of Joan of Constantinople, who was the daughter of Andronikos III Palaiologos, Emperor of the Byzantine Empire.

Page views of Prince Philippe, Count of Flanders by language

Among noblemen, Prince Philippe, Count of Flanders ranks 144 out of 843. Before him are Harald II of Denmark, Prince Andrew, Duke of York, Joanna of Austria, Princess of Portugal, Gian Galeazzo Sforza, Cosimo II de' Medici, Grand Duke of Tuscany, and Judith of Bavaria. After him are Piero the Unfortunate, Ramesses VIII, Marie Joséphine of Savoy, Bertrada of Laon, Grand Duke Kirill Vladimirovich of Russia, and Alfonso I d'Este, Duke of Ferrara.