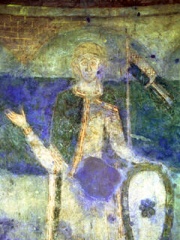 Samo (c. 600–c. 658) founded the first recorded political union of Slavic tribes, known as Samo's Empire (realm, kingdom, or tribal union), stretching from Silesia to present-day Slovenia, ruling from 623 until his death in 658. According to Fredegarius, the only contemporary source, Samo was a Frankish merchant who unified several Slavic tribes against robber raids and violence by nearby settled Avars, showing such bravery and command skills in battle that he was elected as the "Slavic king" (Latin: rex Sclavorum). Read more on Wikipedia

Since 2007, the English Wikipedia page of Samo has received more than 267,115 page views. His biography is available in 33 different languages on Wikipedia. Samo is the 1,226th most popular politician (up from 1,879th in 2019), the 50th most popular biography from Belgium (up from 75th in 2019) and the 19th most popular Belgian Politician.

Samo is most famous for its ancient ruins, which date back to the 8th century.

Page views of Samos by language

Among politicians, Samo ranks 1,226 out of 15,710. Before him are Humayun, 2nd Dalai Lama, Frank-Walter Steinmeier, Napoléon Louis Bonaparte, Nitocris, and Margaret of Anjou. After him are Trebonianus Gallus, Berenice IV of Egypt, John VI Kantakouzenos, Ariq Böke, Romanos I Lekapenos, and Herod Agrippa.