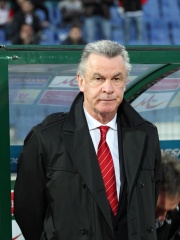 Ottmar Hitzfeld (German pronunciation: [ˈʔɔtmaːɐ̯ ˈhɪt͡sfɛlt]; born 12 January 1949) is a German former professional football player (striker) and manager, nicknamed der General ("the general"). He has accumulated a total of 18 major titles, mostly in his tenures with Grasshopper Club Zürich, Borussia Dortmund, and Bayern Munich. A trained mathematician and sports teacher, Hitzfeld is one of the most successful coaches of German and international football. Read more on Wikipedia

Ottmar Hitzfeld is most famous for his coaching success with the German national team and Bayern Munich. He won the World Cup with Germany in 1990 and coached them to victory in the European Championships in 1996. He also coached Bayern Munich to a Champions League title in 2001.