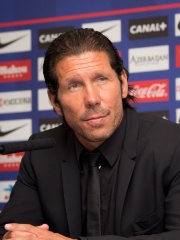 Diego Pablo Simeone González (Spanish pronunciation: [ˈdjeɣo ˈpaβlo simeˈone]; Italian: [ˈdjɛːɡo simeˈoːne, ˈdjeː-]; born 28 December 1968), nicknamed El Cholo ([el ˈtʃolo]), is an Argentine professional football manager and former player who played as a defender; he has been the manager of Atlético Madrid since December 2011.In his club career that started in 1987, Simeone played in Argentina, Italy, and Spain for Vélez Sarsfield, Pisa, Sevilla, Atlético Madrid, Inter Milan, Lazio, and Racing Club. He won a domestic double with Atlético Madrid in 1996, and the UEFA Cup with Inter in 1998, also winning another domestic double with Lazio in 2000, as well as the 1999 UEFA Super Cup and the 2000 Supercoppa Italiana. Simeone was capped over 100 times for the Argentina national team and represented the country at the 1994, 1998, and 2002 FIFA World Cups, and in four editions of the Copa América, winning the tournament in 1991 and 1993. Read more on Wikipedia

Diego Simeone is most famous for being the manager of Atlético Madrid. He is also a former Argentine footballer who played as a midfielder.

Among COACHES In Argentina