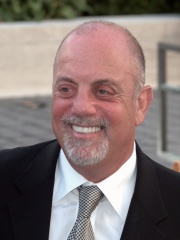 William Martin Joel (born May 9, 1949) is an American singer, pianist and songwriter. Commonly nicknamed the "Piano Man" after his album and signature song of the same name, he has led a commercially successful career as a solo artist since the 1970s, having released 12 pop and rock studio albums from 1971 to 1993 as well as one studio album of classical compositions in 2001. He is one of the best-selling music artists of all time, as well as the seventh-best-selling recording artist and the fourth-best-selling solo artist in the United States, with over 160 million records sold worldwide. Read more on Wikipedia

Billy Joel is most famous for his song "Piano Man." He is also known for his work as a pianist and singer-songwriter.