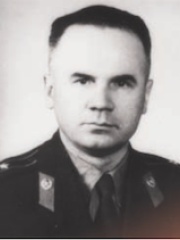 Oleg Vladimirovich Penkovsky (Russian: Олег Владимирович Пеньковский; 23 April 1919 – 16 May 1963), codenamed HERO, was a Soviet military intelligence (GRU) colonel during the late 1950s and early 1960s. Penkovsky informed the United States and the United Kingdom about Soviet military secrets, most importantly, the appearance and footprint of Soviet intermediate-range ballistic missile (IRBM) installations and the weakness of the Soviet intercontinental ballistic missile (ICBM) program. This information was decisive in allowing the US to recognize that the Soviets were placing IRBMs in Cuba before most of the missiles were operational. It also gave US President John F. Read more on Wikipedia

Among politicians, Oleg Penkovsky ranks 3,696 out of 15,577. Before him are Hormizd II, Mary of Clopas, Vologases I of Parthia, Prince Alexander of Hesse and by Rhine, Ahmad ibn Tulun, and Charibert II. After him are Nicholas Kanabos, Şah Sultan, Musa Çelebi, Marcus Claudius Marcellus, Ziusudra, and Ghazi of Iraq.