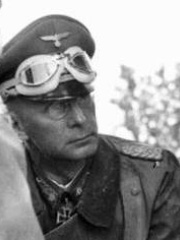 Georg-Hans Reinhardt (1 March 1887 – 23 November 1963) was a German general and war criminal during World War II. He commanded the 3rd Panzer Army from 1941 to 1944, and Army Group Centre in 1944 and 1945, reaching the rank of colonel general (Generaloberst). Following the war, Reinhardt was tried in the High Command Trial, as part of the Subsequent Nuremberg Trials. He was found guilty of war crimes and crimes against humanity and sentenced to 15 years. Read more on Wikipedia

Georg-Hans Reinhardt was a German general who commanded the Sixth Army in the Battle of Stalingrad. He was famous for his aggressive tactics and for being one of the few German generals to have won a major battle against the Soviet Union.

Among military personnels, Georg-Hans Reinhardt ranks 399 out of 1,466. Before him are Christian Wirth, Archduke Leopold Wilhelm of Austria, Thomas the Slav, Alexander von Falkenhausen, Josef Harpe, and Gao Shun. After him are Gustav Wagner, Ernst von Mansfeld, Nikolai Kuznetsov, Yoshiko Kawashima, Alfred I, Prince of Windisch-Grätz, and Sergey Sokolov.