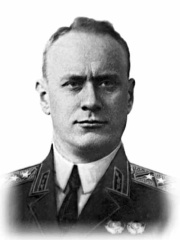 Ivan Alexandrovich Serov (Russian: Ива́н Алекса́ндрович Серóв; 13 August 1905 – 1 July 1990) was a Russian Soviet intelligence officer who served as the head of the KGB between March 1954 and December 1958, as well as head of the GRU between 1958 and 1963. He was Deputy Commissar of the NKVD under Lavrentiy Beria, and played a major role in the political intrigues after Joseph Stalin's death. Serov helped establish a variety of secret police forces in Central and Eastern Europe after the construction of the Iron Curtain, and played an important role in crushing the Hungarian Revolution of 1956.Serov headed both the political intelligence agency (KGB) and the military intelligence agency (GRU), making him unique in Soviet/Russian history. Read more on Wikipedia

Since 2007, the English Wikipedia page of Ivan Serov has received more than 352,191 page views. His biography is available in 23 different languages on Wikipedia (up from 22 in 2019). Ivan Serov is the 4,303rd most popular politician (down from 4,072nd in 2019), the 404th most popular biography from Russia and the 120th most popular Russian Politician.

Among politicians, Ivan Serov ranks 4,303 out of 15,710. Before him are Inge II of Norway, Yusef of Morocco, Treniota, Duke Huan of Qi, Gojong of Goryeo, and Emperor Duanzong. After him are Baruch ben Neriah, Adel Shah, Haakon II of Norway, Prince Ernest Augustus of Hanover, Vicente Guerrero, and Leo Jogiches.