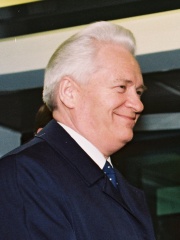 Ivan Stepanovich Silayev (Russian: Ива́н Степа́нович Сила́ев; born 21 October 1930) is a former Soviet and Russian politician. He served as Prime Minister of the Soviet Union through the offices of chairman of the Committee on the Operational Management of the Soviet economy (28 August – 19 December 1991) and chairman of the Inter-republican or Interstate Economic Committee (20 September – 19 December 1991). Read more on Wikipedia

Ivan Silayev is most famous for being the Prime Minister of Russia during the end of the Soviet Union.

Among politicians, Ivan Silayev ranks 4,226 out of 15,710. Before him are Michel Suleiman, Wilhelmina of Prussia, Princess of Orange, Wilhelmine of Prussia, Margravine of Brandenburg-Bayreuth, Alexander V of Macedon, Maria Teresa, Princess of Beira, and Margaret II, Countess of Hainaut. After him are Gentius, George II Rákóczi, Johann Wilhelm, Elector Palatine, Itamar Franco, Roger Mortimer, 1st Earl of March, and Mōri Motonari.