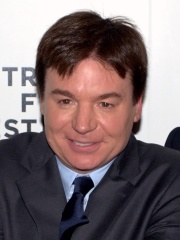 Michael John Myers, OC (born May 25, 1963) is a Canadian actor, comedian, singer, director, producer, and screenwriter known for his run as a performer on Saturday Night Live from 1989 to 1995 and for playing the title roles in the Wayne's World, Austin Powers, and Shrek film franchises. Myers made his directorial debut with the documentary Supermensch: The Legend of Shep Gordon (2013). Read more on Wikipedia

Among actors, Mike Myers ranks 951 out of 10,030. Before him are John Noble, Joe Mantegna, Ricardo Montalbán, Til Schweiger, Rosanna Arquette, and Randolph Scott. After him are Run Run Shaw, Marika Rökk, Laura Dern, Robert Hardy, Charlotte Gainsbourg, and Linda Gray.