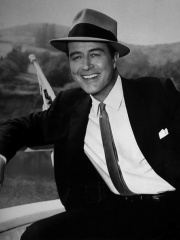 Ray Milland (born Alfred Reginald Jones; 3 January 1907 – 10 March 1986) was a Welsh-American actor and film director. His screen career ran from 1929 to 1985, and he is remembered for his Academy Award and Cannes Film Festival Award-winning portrayal of an alcoholic writer in Billy Wilder's The Lost Weekend (1945) and also for such roles as a sophisticated leading man opposite John Wayne's corrupt character in Reap the Wild Wind (1942), the murder-plotting husband in Alfred Hitchcock's Dial M for Murder (1954), and Oliver Barrett III in Love Story (1970).Before becoming an actor, Milland served in the Household Cavalry of the British Army, becoming a proficient marksman, horseman and aeroplane pilot. He left the army to pursue a career in acting and appeared as an extra in several British productions before getting his first major role in The Flying Scotsman (1929). Read more on Wikipedia

Ray Milland is most famous for his role in Alfred Hitchcock's "Dial M for Murder" and "The Lost Weekend."