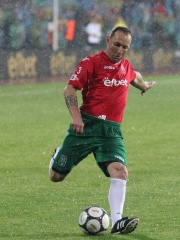 Jean-Pierre Roger Guillaume Papin (French pronunciation: ​[ʒɑ̃ pjɛʁ papɛ̃]; born 5 November 1963) is a French former professional footballer who played as a forward, and who was named the Ballon d'Or and IFFHS World's Top Goal Scorer of the Year in 1991. Papin is currently manager of French Championnat National 2 club C'Chartres Football Papin achieved his greatest success while playing for Marseille between 1986 and 1992. He later played for A.C. Milan, FC Bayern Munich, Bordeaux, Guingamp, JS Saint-Pierroise and US Cap-Ferret. Read more on Wikipedia

Since 2007, the English Wikipedia page of Jean-Pierre Papin has received more than 747,162 page views. His biography is available in 48 different languages on Wikipedia making him the 49th most popular coach.

Among COACHES In France