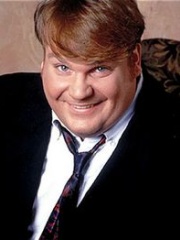 Christopher Crosby Farley (February 15, 1964 – December 18, 1997) was an American actor and comedian. Farley was known for his loud, energetic comedic style, and was a member of Chicago's Second City Theatre and later a cast member of the NBC sketch comedy show Saturday Night Live between 1990 and 1995. He then went on to pursue a film career, starring in films such as Coneheads, Tommy Boy, Black Sheep, Beverly Hills Ninja, Billy Madison, Dirty Work, and Almost Heroes (1998). Read more on Wikipedia

Since 2007, the English Wikipedia page of Chris Farley has received more than 11,731,992 page views. His biography is available in 43 different languages on Wikipedia making him the 3,553rd most popular actor.

Among actors, Chris Farley ranks 3,508 out of 8,832. Before him are Henry B. Walthall, Madeline Kahn, Kurt Fuller, Brett Cullen, Jessica Walter, and Jaimie Alexander. After him are Gilbert Roland, Béatrice Dalle, Bill Nunn, Otto Waalkes, Zero Mostel, and Richard Madden.