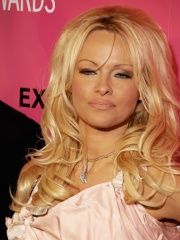 Pamela Denise Anderson (born July 1, 1967) is a Canadian-American actress, model, activist, and author. She is known for her numerous appearances in Playboy and for her work on the television series Home Improvement (1991–1993, 1997), Baywatch (1992–1997), and V.I.P. (1998–2002). She was the recipient of a star on the Canadian Walk of Fame in 2006.Anderson came to public prominence after being selected as the February 1990 Playmate of the Month for Playboy. Read more on Wikipedia

Pamela Anderson is most famous for her role as C.J. Parker on the television series Baywatch. She was also a Playboy model and an actress.