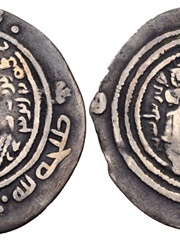 Marwan ibn al-Hakam ibn Abi al-As ibn Umayya (Arabic: مروان بن الحكم بن أبي العاص بن أمية, romanized: Marwān ibn al-Ḥakam ibn Abī al-ʿĀṣ ibn Umayya), commonly known as Marwan I (623 or 626 – April/May 685), was the fourth Umayyad caliph, ruling for less than a year in 684–685. He founded the Marwanid ruling house of the Umayyad dynasty, which replaced the Sufyanid house after its collapse in the Second Muslim Civil War and remained in power until 750. During the reign of his cousin Uthman (r. Read more on Wikipedia

Marwan I is most famous for being the second caliph of the Umayyad dynasty.

Page views of Marwan IS by language

Among politicians, Marwan I ranks 782 out of 15,577. Before him are Louis VI of France, Al-Ma'mun, Anton Drexler, Baudouin of Belgium, Nikephoros I, and Publius Quinctilius Varus. After him are Chlothar I, Ante Pavelić, Childeric I, Henry III of England, Ardashir I, and Julius Nepos.

Among people born in 623, Marwan I ranks 1.  Among people deceased in 685, Marwan I ranks 2. Before him is Pope Benedict II. After him are Constantine IV, Ubayd Allah ibn Ziyad, Anania Shirakatsi, Catald, Hlothhere of Kent, and Ecgfrith of Northumbria.