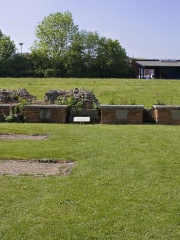 Hlothhere (Old English: Hloþhere; died 6 February 685) was a King of Kent who ruled from 673 to 685.He succeeded his brother Ecgberht I in 673. He must have come into conflict with Mercia, since in 676 the Mercian king Æthelred invaded Kent and caused great destruction; according to Bede, even churches and monasteries were not spared, and Rochester was laid waste. Hlothhere's rule survived this onslaught, however. Read more on Wikipedia

Page views of Hlothhere of Kents by language