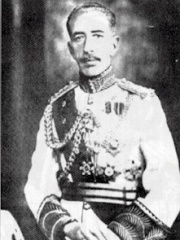 Faisal I of Iraq

Faisal I bin Hussein bin Ali al-Hashemi (Arabic: فيصل بن الحسين بن علي الهاشمي‎, Fayṣal al-Awwal ibn al-Ḥusayn ibn ‘Alī al-Hāshimī; 20 May 1883 – 8 September 1933) was King of the Arab Kingdom of Syria or Greater Syria in 1920, and was King of Iraq from 23 August 1921 to 1933. He was the third son of Hussein bin Ali, the Grand Sharif of Mecca, who had proclaimed himself King of the Arab lands in October 1916. Faisal fostered unity between Sunni and Shiite Muslims to encourage common loyalty and promote pan-Arabism in the goal of creating an Arab state that would include Iraq, Syria and the rest of the Fertile Crescent. Read more on Wikipedia

Page views of Faisal I of Iraqs by language

Among politicians, Faisal I of Iraq ranks 1,084 out of 15,710. Before him are Empress Gi, Pierre Laval, Chongzhen Emperor, James A. Garfield, Rama, and Christian III of Denmark. After him are Psamtik I, Ptolemy III Euergetes, Polycrates, Ferdinand VI of Spain, Lorenzo de' Medici, Duke of Urbino, and Charles II, Archduke of Austria.