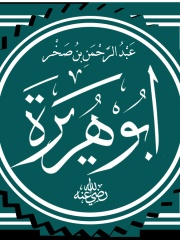 Abu Hurayra (Arabic: أبو هريرة, romanized: Abū Hurayra; c. 603–681) was one of the companions of Islamic prophet Muhammad and, according to Sunni Islam, the most prolific narrator of hadith. He was known by the kunyah Abu Hurayrah "Father of a Kitten", in reference to his attachment to cats, and he was a member of Suffah. Read more on Wikipedia

Abu Hurairah is most famous for being a companion of the Prophet Muhammad. He was the most prolific narrator of hadith and is considered to be one of the most important transmitters of Prophetic traditions.

Among religious figures, Abu Hurairah ranks 318 out of 2,238. Before him are Idris, Bahá'u'lláh, Pope Marinus I, Marcion of Sinope, Pope Pelagius II, and Pope Anacletus. After him are Pope John XXI, Pope John I, Pope Zachary, Pope Stephen IV, Pope Adrian V, and Pope Callixtus I.