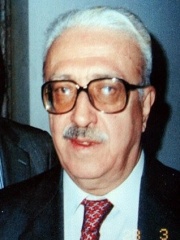 Tariq Aziz (Arabic: طارق عزيز‎ Ṭāriq ʿAzīz, 28 April 1936 – 5 June 2015) was Iraqi Deputy Prime Minister (1979–2003) and Foreign Minister (1983–1991) and a close advisor of President Saddam Hussein. Their association began in the 1950s when both were activists for the then-banned Arab Socialist Ba'ath Party. He was both an Arab nationalist and an ethnic Assyrian, and a member of the Chaldean Catholic Church.Because of security concerns, Saddam rarely left Iraq, so Aziz would often represent Iraq at high-level diplomatic summits. Read more on Wikipedia

Tariq Aziz is most famous for being the foreign minister of Iraq under Saddam Hussein.

Among politicians, Tariq Aziz ranks 2,292 out of 15,710. Before him are Emperor Go-Momozono, Marcelo Caetano, Louis I, Duke of Bourbon, Alexander Jagiellon, Senusret II, and Fausta. After him are Peter II of Portugal, Jephthah, Milada Horáková, Gian Galeazzo Visconti, Kęstutis, and Nogai Khan.