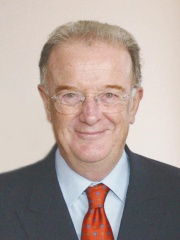 Jorge Fernando Branco de Sampaio (Portuguese pronunciation: [ˈʒɔɾʒ(ɨ) sɐ̃ˈpaju] (listen); 18 September 1939 – 10 September 2021) was a Portuguese lawyer and politician who was the 18th President of Portugal from 1996 to 2006. A member of the Socialist Party, a party which he led between 1989 and 1992, he was the mayor of Lisbon from 1990 to 1995 and High-Representative for the Alliance of Civilizations between 2007 and 2013. He was an opponent to the dictatorship of Estado Novo, who participated in the student crisis in the 1960s and was a lawyer for political prisoners. Read more on Wikipedia

Jorge Sampaio was the President of Portugal from 1996 to 2006. He is most famous for his work in the area of human rights, including his campaign against the death penalty.