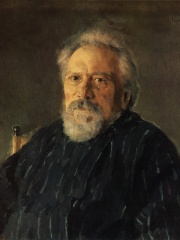 Nikolai Semyonovich Leskov (Russian: Никола́й Семёнович Леско́в; 16 February [O.S. 4 February] 1831 – 5 March [O.S. 21 February] 1895) was a Russian novelist, short-story writer, playwright, and journalist, who also wrote under the pseudonym M. Stebnitsky. Praised for his unique writing style and innovative experiments in form, and held in high esteem by Leo Tolstoy, Anton Chekhov and Maxim Gorky among others, Leskov is credited with creating a comprehensive picture of contemporary Russian society using mostly short literary forms. His major works include Lady Macbeth of Mtsensk (1865) (which was later made into an opera by Shostakovich), The Cathedral Folk (1872), The Enchanted Wanderer (1873), and "The Tale of Cross-eyed Lefty from Tula and the Steel Flea" (1881).Leskov received his formal education at the Oryol Lyceum. Read more on Wikipedia

Nikolai Leskov is most famous for his novel "The Enchanted Wanderer" and the short story "Lady Macbeth of the Mtsensk District."