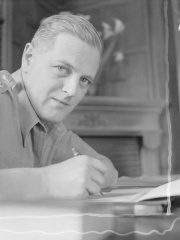 Randolph Frederick Edward Spencer-Churchill (28 May 1911 – 6 June 1968) was a British journalist, writer and a Conservative Member of Parliament (MP) for Preston from 1940 to 1945. He was the only son of British Prime Minister Sir Winston Churchill and his wife, Clementine Churchill, Baroness Spencer-Churchill. He wrote the first two volumes of the official life of his father, complemented by an extensive archive of materials. Read more on Wikipedia

Since 2007, the English Wikipedia page of Randolph Churchill has received more than 2,664,686 page views. His biography is available in 18 different languages on Wikipedia making him the 8,252nd most popular politician.

Among politicians, Randolph Churchill ranks 8,208 out of 14,801. Before him are Pedro Carmona, George William, Prince of Schaumburg-Lippe, Aleksander Čeferin, Nahum Sokolow, Menestheus, and Carlos Castillo Armas. After him are Helen of Bosnia, Rostislav I of Kiev, Richard of Conisburgh, 3rd Earl of Cambridge, Anthemius, Prince Ferdinand Pius, Duke of Calabria, and Frederick II, Duke of Saxe-Gotha-Altenburg.