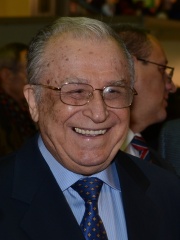 Ion Iliescu (Romanian pronunciation: [iˈon iliˈesku] (listen); born 3 March 1930) is a Romanian politician who served as President of Romania from 1989 to 1996 and from 2000 until his retirement in 2004. Iliescu was a senator for the Social Democratic Party (PSD), of which he is the founder and honorary president. He joined the Communist Party in 1953 and became a member of its Central Committee in 1965. Read more on Wikipedia

Since 2007, the English Wikipedia page of Ion Iliescu has received more than 561,684 page views. His biography is available in 51 different languages on Wikipedia making him the 1,265th most popular politician.

Among politicians, Ion Iliescu ranks 1,259 out of 14,801. Before him are Dorgon, Yeonsangun of Joseon, Gaspard II de Coligny, Berenice IV of Egypt, David Lloyd George, and Almanzor. After him are Nabonidus, Václav Klaus, Roh Moo-hyun, Faisal I of Iraq, Ptolemy VI Philometor, and Ruth.