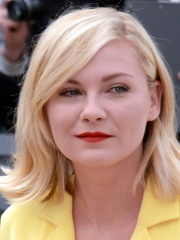 Kirsten Caroline Dunst (; born April 30, 1982) is an American actress. Dunst made her film debut in Woody Allen's New York Stories (1989), followed by Brian De Palma's The Bonfire of the Vanities (1990). At age twelve, she gained widespread recognition for her performance as Claudia in the 1994 film adaptation of Interview with the Vampire, which earned her critical acclaim and a Golden Globe nomination for Best Supporting Actress. Read more on Wikipedia

Since 2007, the English Wikipedia page of Kirsten Dunst has received more than 15,134,509 page views. Her biography is available in 80 different languages on Wikipedia making her the 1,083rd most popular actor.