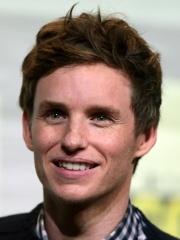 Edward "Eddie" John David Redmayne (; born 6 January 1982) is an English actor. He is the recipient of various accolades, including an Academy Award, a Tony Award, a Golden Globe Award, and a BAFTA Award. He began his professional acting career as a youth in West End theatre before making his screen debut in 1996 with guest television appearances. Read more on Wikipedia

Among people born in 1982, Eddie Redmayne ranks 6. Before him are Anne Hathaway, Kaká, Prince William, Duke of Cambridge, Catherine, Duchess of Cambridge, and Lil Wayne. After him are Adriano, Kirsten Dunst, Petr Čech, Jessica Biel, Víctor Valdés, and Sultan Kösen.