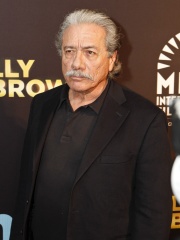 Edward James Olmos (born February 24, 1947) is an American actor, director, producer, and activist. He is best known for his roles as Lieutenant Martin "Marty" Castillo in Miami Vice (1984–1989), actor in and director of American Me (1992), William Adama in the re-imagined Battlestar Galactica (2004–2009), teacher Jaime Escalante in Stand and Deliver (1988), for which he received an Academy Award nomination, and Detective Gaff in Blade Runner (1982) and its sequel Blade Runner 2049 (2017). In 2018 through 2022, he has played the father of two members of an outlaw motorcycle club in the FX series Mayans MC. For his work in Miami Vice, Olmos won the 1985 Primetime Emmy Award for Outstanding Supporting Actor in a Drama Series, as well as the Golden Globe Award for Best Supporting Actor – Series, Miniseries or Television Film. Read more on Wikipedia