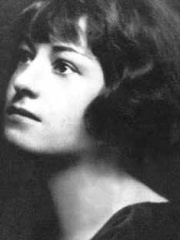 Dorothy Parker (née Rothschild; August 22, 1893 – June 7, 1967) was an American poet, writer, critic, and satirist based in New York; she was best known for her wit, wisecracks, and eye for 20th-century urban foibles. From a conflicted and unhappy childhood, Parker rose to acclaim, both for her literary works published in magazines, such as The New Yorker, and as a founding member of the Algonquin Round Table. Following the breakup of the circle, Parker traveled to Hollywood to pursue screenwriting. Read more on Wikipedia

Among writers, Dorothy Parker ranks 1,864 out of 5,794. Before her are Thomas Wyatt, John of Ruusbroec, John of Ephesus, Menander Protector, Catherine of Bologna, and Avitus of Vienne. After her are Alexandre Benois, Zeki Müren, Frans Sammut, Philippe de Commines, Jean-Jacques Ampère, and Mikhail Zoshchenko.