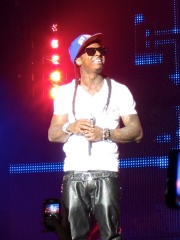 Dwayne Michael Carter Jr. (born September 27, 1982), better known by his stage name Lil Wayne, is an American rapper, singer, songwriter, record executive, entrepreneur, and actor. He is regarded by many contemporaries as one of the most influential hip hop artists of his generation, and often cited as one of the greatest rappers of all time. Read more on Wikipedia

Since 2007, the English Wikipedia page of Lil Wayne has received more than 20,124,635 page views. His biography is available in 62 different languages on Wikipedia making him the 238th most popular singer.

Among singers, Lil Wayne ranks 238 out of 3,001. Before him are Tarkan, Sade, Chris Cornell, Frida Boccara, Van Morrison, and Sonny Bono. After him are Gene Vincent, Lucia Popp, Teresa Berganza, Gianni Morandi, Glenn Hughes, and Psy.

Among people born in 1982, Lil Wayne ranks 6. Before him are Catherine, Duchess of Cambridge, Kaká, Anne Hathaway, Prince William, Duke of Cambridge, and Petr Čech. After him are Eddie Redmayne, Kirsten Dunst, Víctor Valdés, Adriano, Jessica Biel, and Priyanka Chopra.