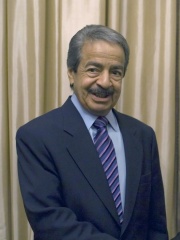 Prince Khalifa bin Salman Al Khalifa (Arabic: خليفة بن سلمان آل خليفة‎) (born 24 November 1935) is a Bahraini royal and politician who has served as the Prime Minister of Bahrain since 1970, taking office over a year before Bahrain's independence on 15 August 1971. He is the longest-serving current Prime Minister of any government in the world. He still retains a great amount of power, although under the 2002 Constitution he lost some of his powers, with the King having the authority to appoint and (along with the Bahraini parliament) dismiss ministers. Read more on Wikipedia

Since 2007, the English Wikipedia page of Khalifa bin Salman Al Khalifa has received more than 286,785 page views. His biography is available in 34 different languages on Wikipedia making him the 4,342nd most popular politician.

Among politicians, Khalifa bin Salman Al Khalifa ranks 4,318 out of 14,801. Before him are Duan Qirui, Pim Fortuyn, Andrej Kiska, Ian Smith, Emperor Xuanzong of Tang, and Francesc Macià. After him are David I of Scotland, Rayhana bint Zayd, Mikheil Saakashvili, Kantarō Suzuki, Ahuitzotl, and Amyntas II of Macedon.

Others born in Bahrain