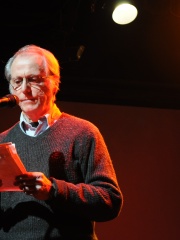 Donald Richard DeLillo (born November 20, 1936) is an American novelist, short story writer, playwright, screenwriter and essayist. His works have covered subjects as diverse as television, nuclear war, sports, the complexities of language, performance art, the Cold War, mathematics, the advent of the digital age, politics, economics, and global terrorism. Initially he was a well-regarded cult writer; however, the publication in 1985 of White Noise brought him widespread recognition, and won him the National Book Award for fiction. Read more on Wikipedia

Since 2007, the English Wikipedia page of Don DeLillo has received more than 999,441 page views. His biography is available in 36 different languages on Wikipedia making him the 1,328th most popular writer.