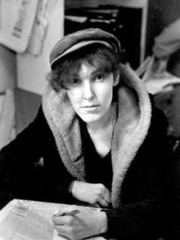 Valerie Jean Solanas (April 9, 1936 – April 25, 1988) was an American radical feminist known for the SCUM Manifesto, which she self-published in 1967, and for her attempt to murder artist Andy Warhol in 1968. Solanas had a turbulent childhood, reportedly suffering sexual abuse from both her father and grandfather, and experiencing a volatile relationship with her mother and stepfather. She came out as a lesbian in the 1950s. Read more on Wikipedia

Valerie Solanas is most famous for her radical feminist manifesto, "SCUM Manifesto," in which she advocates for the elimination of men.

Among writers, Valerie Solanas ranks 1,246 out of 5,755. Before her are Yosa Buson, Babrius, Poul Anderson, Jerzy Kosiński, Henry Wadsworth Longfellow, and Giovanni Verga. After her are Anthony Bourdain, Laura Marx, Per Olov Enquist, Johann Peter Eckermann, Thomas of Celano, and Aksel Sandemose.