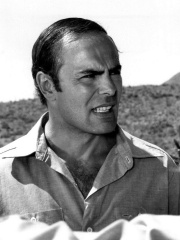 John Saxon (born Carmine Orrico; August 5, 1936 – July 25, 2020) was an American film and television actor who worked on more than 200 projects during a span of 60 years. He was known for his work in Westerns and horror films, often playing police officers and detectives. Born and raised in Brooklyn, New York, Saxon studied acting with Stella Adler before beginning his career as a contract actor for Universal Pictures, appearing in such films as Rock, Pretty Baby (1956) and Portrait in Black (1961), which earned him a reputation as a teen idol and won him a Golden Globe Award for New Star of the Year – Actor. Read more on Wikipedia

John S.A.X.N. is most famous for being a pioneer in the field of computer-aided design and computer-aided manufacturing. He is credited with coining the term CAD/CAM.