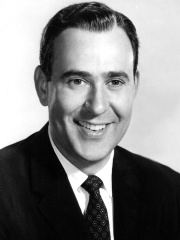 Carl Reiner (March 20, 1922 – June 29, 2020) was an American actor, comedian, director, screenwriter, and author whose career spanned seven decades. During the early years of television comedy from 1950 to 1957, he acted on and contributed sketch material for Your Show of Shows and Caesar's Hour, starring Sid Caesar. In the 1960s, Reiner was best known as the creator, producer, writer, and actor on The Dick Van Dyke Show.Reiner formed a comedy duo with Mel Brooks in "2000 Year Old Man" and acted in such films as It's a Mad, Mad, Mad, Mad World (1963), The Russians Are Coming, the Russians Are Coming (1966), and the Ocean's film series (2001–2007). Read more on Wikipedia

Since 2007, the English Wikipedia page of Carl Reiner has received more than 5,360,300 page views. His biography is available in 67 different languages on Wikipedia making him the 1,030th most popular actor.